A Park, A Refugee, and A Great Ending – Story from Athens

By Laura Wilcox in Missions

“As for the rest of you, dear brothers and sisters, never get tired of doing good.”~ II Thess. 3:13

“How long are you here? I want to talk to you.” Abdul* confided as we stood in a park in Athens, Greece surrounded by refugees huddled in groups, sleeping on benches, and children running in the grassy areas. Moments before I asked the Holy Spirit to guide my steps as I walked through the park; my eye catching Abdul handing out flyers to a group of women dressed according to Islamic code.

Curious about the contents of the flyer and hopeful for an opportunity to speak with the women, I walk up to Abdul. He explains in well pronounced English the flyer describes language classes for refugees to learn Greek and English. As we talk I learn about his story. He grew up in Pakistan and when his family’s resources failed to sustain them including the ability for the family to offer his sister in marriage, he departed for Athens at his family’ request over six years ago to send money home.

Abdul’s desire for a better life didn’t materialize. The language classes he offered refugees took up a couple of days a week and helped provide but didn’t make ends meet. Like so many others in Athens he knows the despair of not being able to find work.

I broach the topic of spiritual things and Abdul shares about four books he currently reads- the Koran, the Bible and two others. Sensing the Holy Spirit’s prompting, I inquire about his thoughts on Jesus. Abdul replies Jesus is a revered prophet.

“Jesus doesn’t give you the option to believe He is merely a prophet. He says ‘I and the Father are One. . .and He who has seen Me has seen the Father also’” (John 10:30, 14:9) I say as the Holy Spirit brings Scripture to mind. My nuggets of truth propel Abdul to fervently ask about the length of my stay and express his desire to meet.

The next day Alison* who also came to Greece to reach out joins me at a designated coffee shop to meet Abdul. We share with him the need for forgiveness and Jesus’ payment on the cross to make a way to enter heaven (or paradise for a Muslim mindset). Explaining the Gospel in a second language means Abdul doesn’t grasp all the concepts. At one point he writes down the verse references we show him and looks up, almost pleading as he says, “Please pray for me to understand.” My heart goes out to him.

Because tension exists between Muslim and Christian refugees, Abdul declined my original offer for Hakim* a refugee from Pakistan who knows the Lord and works alongside the short -term teams to join us for coffee. However, a couple of days later he agrees to meet Hakim. During the brief introduction, Abdul’s friend Salar who accompanies him seems suspicious of us, informing us they need to leave in order to go to the mosque for prayer. 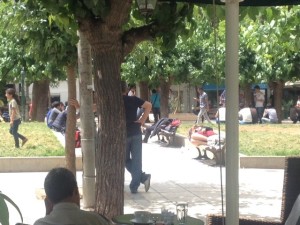 Days later I leave Athens and pray for Abdul’s seed of curiosity to blossom. Hakim relays what happened (in an email to me) in the following months:

“During the introduction with Laura I asked Abdul and Salar how they obtained a Bible. I found out they knew a brother from a Pakistani church so I contacted him. He told me to be careful because these two friends hold strong connections with political parties in Pakistan and the branch in Athens. He warned their behavior could mask a desire to find out more about how Christians deal with new believers more than a genuine interest in the Gospel.

When the team of Americans left I called Abdul and Salar to see if they can meet to talk further about Christianity. Abdul told me he wanted to meet but he is busy with his job and so is Salar. After almost two months of attempting to meet and several calls, I met with them and discovered both begun to read the Bible after hearing more from short-term missionaries who I didn’t know.

Abdul and Salar expressed intrigue about the reason this foreign man and woman traveled to Athens and began sharing the Christian faith. They talked to their friends from mosque who advised them to gather more information so they can save their Muslim brothers and sisters in Athens from being influenced by Christian missionaries who work against Islam.

Abdul later confessed to me during a one-on-one interaction he initially had this mindset about interacting with Christians but over time God changed his heart. He explained the reason it took him such a long time to trust me and meet again is because of his friend Salar who recently left for Austria. After sharing with me the truth, Abdul expressed his desire to follow Jesus with pure heart. He also said he wanted to leave for Germany. Because he lived in Athens for a number of years and knew many people in the community, it will be very difficult for him to live in Athens as a believer in Jesus Christ.

I decided I could trust what Abdul confided. I asked him to repent and take the faithful step of baptism. He agreed and two days following his baptism he left for Germany where he now resides. We are connected by phone and Abdul actually met a German girl who he plans to marry. Please pray for his spiritual growth and protection.”