By Bert Robinson in Christian Renewal 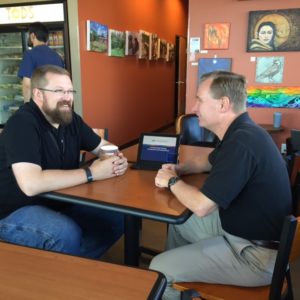 “The vast majority of new pastors end up finding themselves as part of a tragic statistic — those who burn out within the first five years of ministry. Equally tragic is that this burnout usually leaves a trail of destruction seen in the lives of the pastor, his family and even the congregation. I, Steve (on left), made it through six years as a pastor, but that’s not a boast. When my eyes were finally opened to the reality of my situation — that I was sinking fast into depression and anxiety, that I was alone, afraid and self-destructing, it was long past time for me to resign and retreat. My church family was heartbroken both to lose me and to see me so broken. I battled for months with a heavy sense of failure and confusion, not understanding what had gone so wrong. I was lost. But when I met Bert (on right) and had the opportunity to talk with him, the lights began to turn on. I began to see the components of my own makeup that had contributed to the appearance of success and capability, yet inwardly sent me spiraling downward.”

“There is no greater joy in the Christian walk than understanding what part of the Body you are created to be, and then seeing the Kingdom impact of your life following God’s design. Bert’s discipleship ministry brought these things into focus after years of frustration and hurt, which itself was driven by a simple lack of knowledge about myself. Now I know that I am in the kind of ministry I was built for, and already the Holy Spirit is planting, watering and growing a new harvest because of God using Bert in my life.” ~ Steve

If you need someone to talk to, please reach out to us.